The Government of Thailand has defined their energy saving target in Energy Efficiency Development Plan (EEDP 2015) for 2015 – 2036 period, the official targets which has been defined as shown below:

If the target monetarized, the energy reduction is equal from 8.54 ktoe per billion baht (2010) to 5.98 ktoe per billion baht (2036).  It is also expected that at the end of the plan (year 2036), the implementation of energy efficiency measures will reduce the final energy consumption from 187 Mtoe in Business as Usual (BAU) scenario to 131,000 Mtoe and avoidance of about 177 million tons of CO2 emission.

The government identified EE&C as an effective strategy to meet the rising demand for energy in the early 1990s. In 1992, the Energy Conservation Promotion Act was passed and the government created the Energy Conservation Promotion Fund (ECPF). Since then, Thailand developed a comprehensive EE strategy including the development of the National Demand-side Management plan (DSM), the establishment of multiple funds to support EE&C, the introduction of several tax incentives across different sectors and the recent 20-Year Energy Efficiency Development Plan (EEDP).

As part of the EEDP, the government of Thailand aims to reduce energy intensity by 30% compared to 2010 baseline. This plan has a strong focus on improving electricity security and prioritizes the industry and transport sectors. Cumulative benefits from the EEDP are expected to result in the saving of 289,000 ktoe and avoidance of about 976 million tons of CO2e. The plan will be initially financed by the Energy Conservation Promotion Fund (ECPF), which will provide about USD 0.9 million to support activities during the first five years of implementation (2011-2015).

The EEDP addresses the following components: (i) mandatory requirements via rules, regulations and standards, (ii) energy conservation promotion and support, (iii) public awareness creation and behavioral change, and (iv) promotion of technology development. Five years later, the EEDP 2015-2036 was released with updates on energy efficiency targets. The Plan outlines the strategies to achieve the energy efficiency targets, which are classified into compulsory measures (building energy code on new buildings and energy labelling on equipment, among others), voluntary measures (support financial tools to accelerate the change to more energy efficient equipment, such as Light-Emitting Diodes/LEDs) and complementary measures (support human resource development, public awareness, and technology research and development on energy efficiency).

According to the Energy Efficiency Development Plan (EEDP 2015) for 2015 – 2036 period, there are several activities which have been defined to achieve energy efficiency target, as stated in Table 1 below: 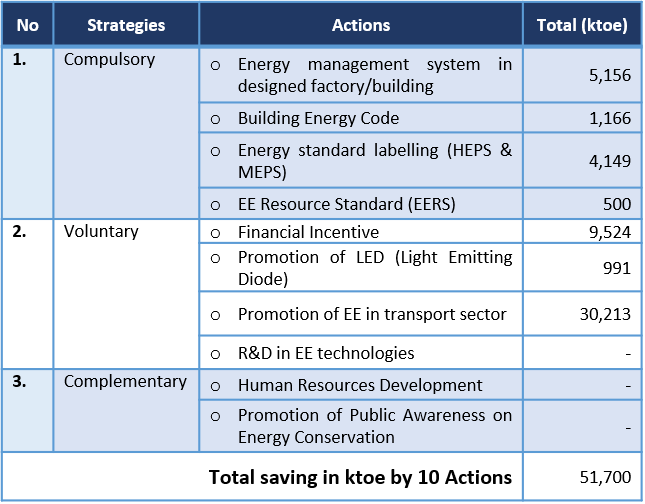