Malaysia has defined energy saving target under the National EE Action Plan (2016). The country aims to reduce its electricity consumption by 8% compared to Business as Usual (BAU scenario) across residential, commercial and industrial sectors over a 10-year period 2016 to 2025.

Since 1970s, EE&C has been part of Malaysia’s policies as when the National Petroleum Policy included elements to increase efficiency within the sector. Further EE&C elements have been included as part of the National Energy Policy (1979), the National RE Policy Action plan (2010) and the National EE Action Plan (2016) and GTMP 2017. In 2015, Malaysian Government released the 11th Malaysia Plan 2016-2020, which aims to promote wellbeing and development in the country. As part of this plan, the Government highlights its intention to promote the adoption of EE technologies across the transport, buildings, products and services sectors. It also sets the target of having at least 20% of green procurement by 2020.

The eleventh (11th) Malaysia Plan 2016-2020 include steps and actions for energy efficiency in the building sector. It targets to achieve the following:

According to The GTMP 2017 published by KeTTHA (now MESTECC), the industry sector of Malaysia was the largest energy user that accounted for 44% of the final power energy consumption in 2014. The commercial sector was at the second rank with the share of 33%, followed by the domestic and residential sectors with a share of 21%.

The potential of energy efficiency in the industrial sector is significant. The energy audits conducted during the Malaysian Industrial Energy Efficiency Improvement Project (MIEEIP) have found that potential energy savings in major industries in Malaysia can be from as low as 2% (for a glass company which was already very efficient) to 52% (for wood companies).

The highest potential energy saved had been found in the cement industry, which at 32.7% of the annual energy consumption of almost 15 million GJ could yield a savings of 4.9 million GJ. The focus on industrial energy efficiency improvement should be on the adaption of energy-efficient equipment and processes, better management of energy at plant and organizational levels and human capacity development

Malaysia has been promoting EE&C initiatives in the region since the early 2000s. In the period of 2000-2010, the Malaysian Government and other international stakeholders including UNDP and DANIDA funded several initiatives aiming to build capacities and promote EE&C in the industry and building sectors. In 2010, the government introduced the Green Technology Financing Scheme (GTFS), which has been one of the main financing instruments in the country, EPCF, which uses government guarantees to make projects more bankable and attractive to investors; it has also implemented the SAVE program, which used rebates as a cost-effective mechanism to promote the adoption of efficient technologies within households. The effective and efficient implementation of Malaysia National Energy Efficiency Action Plan (NEEAP) programs requires an average governmental budget allocation of USD 31.2 million per annual which will cover the cost for administration and incentive. The public expenditure on NEEAP, a total USD 312 million will be leveraged by private sector investments. Overall of USD 2,885 million by private investments will be disbursed within ten years over the plan. From this investment amount, the largest share will be spent on the adaptation of energy efficient technologies.

The Malaysia National Energy Efficiency Action Plan contains 17 specific energy efficiency programs covering three sectors to be implemented over a ten years period. The programs can be grouped into five key initiatives as shown by Table 1. 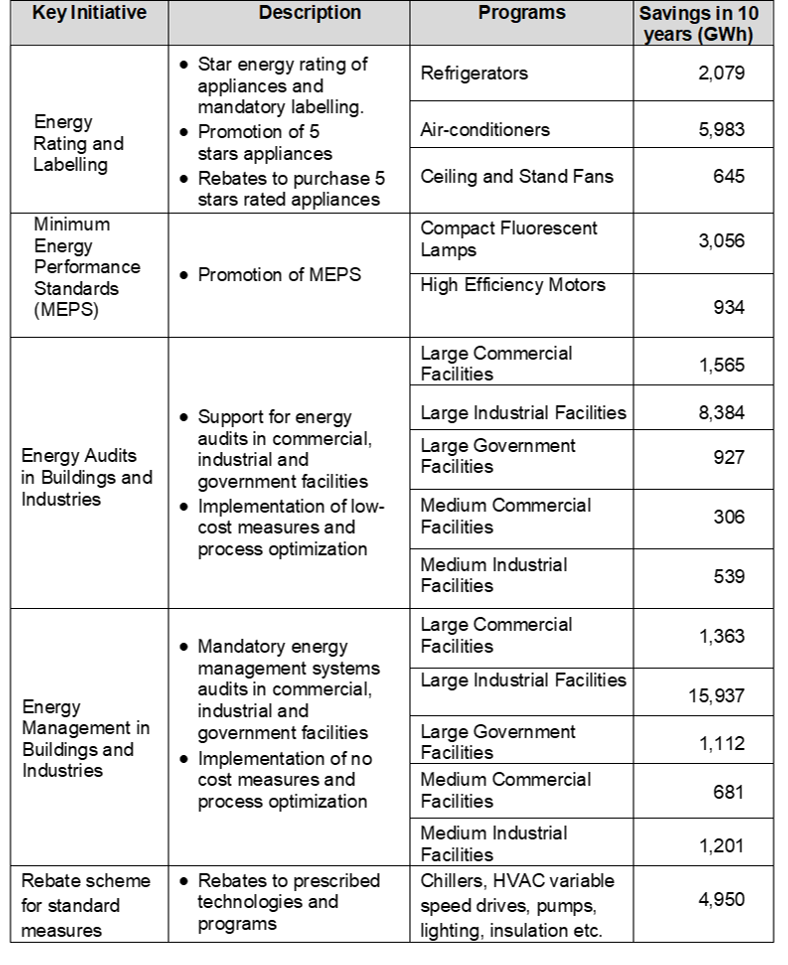 The key agencies involved in energy efficiency include the following: The Energy Section of Economic Planning Unit (EPU) of the Prime Minister’s Department, the Ministry of Energy, Green Technology and Water (MEGTW), the Energy Commission (EC), and the Sustainable Energy Development Authority (SEDA Malaysia).

In addition, as reported by ERIA on sectorial analysis of the energy consumption in Cambodia that more than half of savings (about 680 ktoe) will be biomass based, about 330 ktoe are electricity savings generated from heavy fuel oil, and 180 ktoe are diesel savings.