The main driver within the Philippine energy sector is to become energy self-sufficient. In 2017, the share of imported energy amounted to 44.7% (Department of Energy Philippines). Hence, the security of energy supply is the major concern that defines the national energy policy. The government plans to increase the investment into the exploitation of the domestic fossil fuel resources, while simultaneously introducing the RE sources into the national energy mix.

The Philippine Energy Plan (2017-2040) defined several policy goals: to ensure energy security, to expand energy access, to promote low-carbon, to strengthen collaboration among all government agencies involved in energy, to integrate sectoral and technological roadmaps, to advocate the passage of the department’s legislative agenda, to strengthen consumer welfare and protection and to foster stronger international and partnerships. In the field of electricity regulation, the National Electricity Industry Reform Act from 2001 establishes a framework for a more competitive electricity market. The main goal is to separate the generation, transmission, distribution and supply of energy.

Another important policy is the Renewable Energy Act of 2008 (R.A. No. 9513), which establishes a policy framework for RE development. For the on-grid RE systems, the act paves the way for feed-in tariffs, renewables portfolio standard (RPS), renewable energy market (REM), and net metering. On the off-grid side, RE is aimed to be used as a tool for rural electrification. The National Renewable Energy Board (NREB) was established by this act to support the Department of Energy (DOE) in the RE sector. Moreover, the Renewable Energy Trust Fund (RETF) was also established by the RE Act. The administration is executed by the DOE and the utilization of fund is monitored by NREB. Moreover, in 2013 Energy Regulatory Committee issued the Resolution No. 7 adopting changes to the Philippine Grid Code, in order to accommodate for the Variable Renewable Energy (vRE) generating facilities.

Conventional fossil fuels are the dominant energy source for the Philippines’ primary energy mix (Figure 1). The Philippines has sufficient natural gas resources for domestic use. However, other fossil fuels such as oil and coal are imported. Nevertheless, the share of renewable energy sources is relatively high (34%) due to large geothermal resources and widespread utilization of biomass.

Figure 2 shows the energy generation in the electricity sector. Around 24% of electricity comes from RE sources, mainly geothermal and hydropower. Electricity generated from other renewable resources such as wind, biofuel and solar increase has tripled than previous year.

Philippine's Electricity Generation by Source in 2017 (%)

Figure 3 shows the electricity tariffs for different sectors (residential, commercial and industrial). Tariffs for all sectors are calculated according to two systems: unbundling rate and/or Time of Use (TOU). There are variations of tariffs in different areas, as the transmission and distribution fees are defined by individual grid operators. In general, the tariff in Luzon is the highest, while in Mindanao the lowest.

In fact, the Philippines has one of the highest electricity tariffs among the ASEAN countries. However, the range is very large. Very low tariff is applicable for the residential sector as a part of cross-subsidy system, to benefit the poorest households with low electricity consumption. 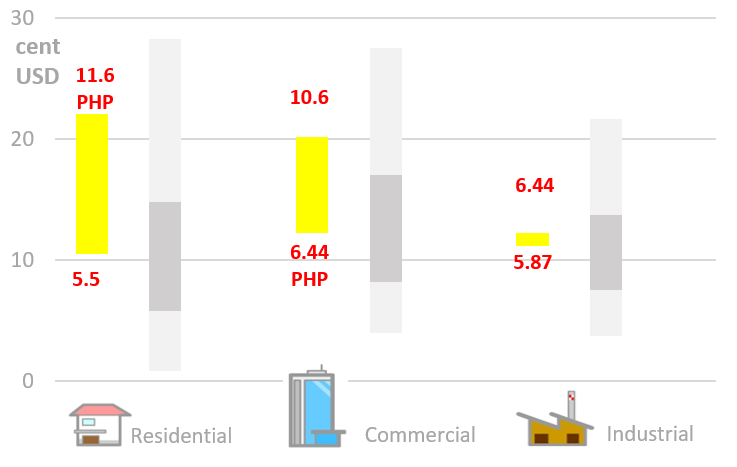