With the abundant oil and gas resources, there is no urgent need for development of renewable energy (RE) in Brunei. Nevertheless, the Long-Term Development Plan (Brunei Vision 2035) recognizes that oil and gas resources cannot keep up with the increasing demand and population growth. Therefore, it aims for economic diversification in parallel to the reinforcement of the oil and gas sector.

The important policy for oil industry is the Oil Conservation Policy, in force since 1981, when the peak of production was recorded. An equivalent strategy for the gas sector i.e. Brunei Natural Gas Policy was introduced in 2000 to ensure that gas export obligation can be met.

A concrete plan for development of renewable energy has not yet been made although there are already some efforts to establish a regulatory framework to facilitate this development. Brunei has already implemented a solar demonstration power plant with the capacity of 1.2 MW. It is planned to expand this plant in the future. Moreover, in the long-term Brunei aims to develop offshore wind projects with the total capacity of between 18 and 20 MW. At this moment, the projects are in an early stage and feasibility study is required before further implementation.

Energy efficiency has been receiving more attention in comparison to renewable energy. Brunei has implemented the National Appliance Standards and Labelling Regulation, which aims at reducing domestic energy consumption in order to enable higher exports of gas. The Energy Efficiency and Conservation Program envisages the reduction of energy use by 45% by 2035 based in 2005 level

Brunei has also developed Energy White Paper (launched on 24 March 2014), which elaborates Brunei’s goals and vision in energy sector. The white paper sets out a framework for action to enable Brunei to address challenges and to manage the projected risks. Under this framework, Brunei in partnership with domestic and international investors are planning and executing initiatives that help them to achieve Brunei Vision 2035.

According to Energy White Paper, the energy sector, in particular oil and gas, is a core driver of Brunei’s economy as it accounts for more than 60% of Brunei’s GDP and employs around 24,000 people with the target at 50,000 people by 2035. Power plant installed capacity in 2015 is 819.4 MW with conventional power stations from oil and gas generated 99.95% of total power generation, while 0.05% was generated by the solar power plant Tenaga Suria Brunei. The target is to increase the share of Renewable energy in the total power generation mix by 10% or 954,000 MWh in 2035 and at the same time to reduce energy intensity by 45% in line with Brunei’s commitment to Asia-Pacific Economic Cooperation (APEC). 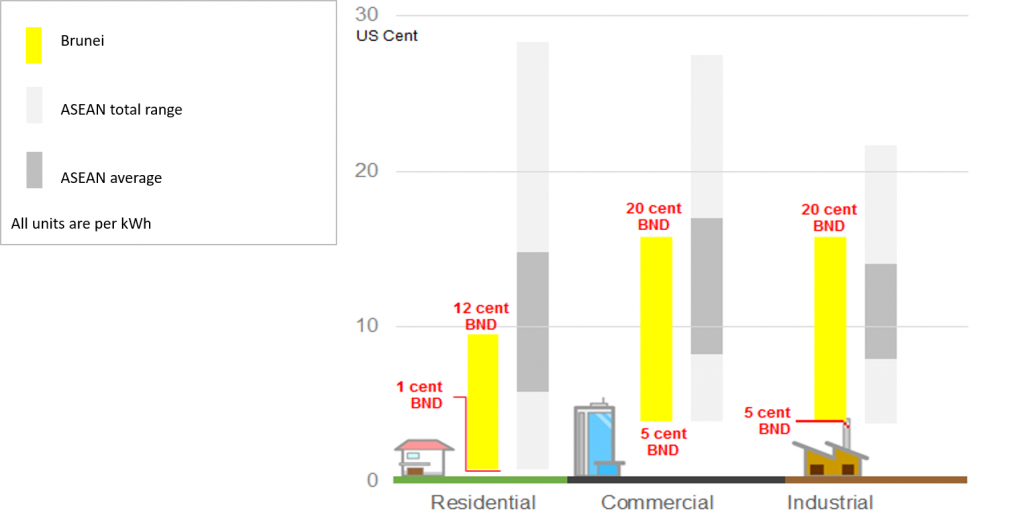 Source: Department of Electrical Services Notes: Commercial and industrial rates are the same, but for comparison purposes with the other ASEAN they are represented separately.

Notes: Commercial and industrial rates are the same, but for comparison purposes with the other ASEAN they are represented separately.

The commercial and industrial consumers are subject to the same tariff system, that is calculated according to the unit of electricity used and the maximum demand rates of power used. The most expensive tariff applies for the first 10 unit used, as the following 100 units will be applied with the next two tariffs. Above 100 units, the 3rd tier will be applied where the remaining units are charged with the cheapest rate.

According to the World Energy Outlook which published in 2016 by IEA, Brunei Darussalam has achieved 100% rate of electrification with only 6% of transmission loss.