The 2014 National Energy Policy (Kebijakan Energi Nasional, KEN) and the 2018 National Energy Plan (Rencana Umum Energi Nasional, RUEN) outlined Indonesia’s targets of reducing energy intensity by 1% per annum on average to 2025 and to achieve an energy elasticity of less than 1 in 2025 (the energy elasticity is the rate of change of total primary energy supply over the rate of change of GDP). The country targets to reduce TFEC by 17% in industrial sector, 20% in transportation, 15% in household and 15% commercial buildings by 2025 compared to Business as Usual (BAU) Scenario (2005) according to National Energy Policy.

The Law No. 30/2007 on Energy, Article 25 on Energy Conservation, sets out general principles for the management of energy resources and the government’s basic targets for the future development of the energy mix. The Government Regulation No.70/2009 on Energy Conservation states the obligation for large energy users (with energy consumption more than 6,000 toe per annum) to implement energy conservation measures through energy management.

The General Plan for National Energy through Presidential Regulation No. 22/2017, developed by the Ministry of Energy and Mineral Resources (MEMR), states the framework for energy efficiency and conservation. The Plan aims to promote EE through four primary activities:

National Energy Conservation Master Plan 2005 which amended on 2014 identified the following sectorial energy saving potentials: 15-30 percent in industry, 25 percent in commercial buildings for electricity, and 10-30 percent in the residential sector.

Ministry of Energy and Mineral Resources in accordance with the Governmental Regulation has defined for reducing energy consumption (TFEC reduction) target 2025 by 17% in industry, 20% in Transportation, 15% in household, 15% in commercial building as compared to energy consumption in Business as usual (BAU) based on 2005 levels.

The comparison on each sector between energy saving potential and target 2025 is represented by Figure 8 below. 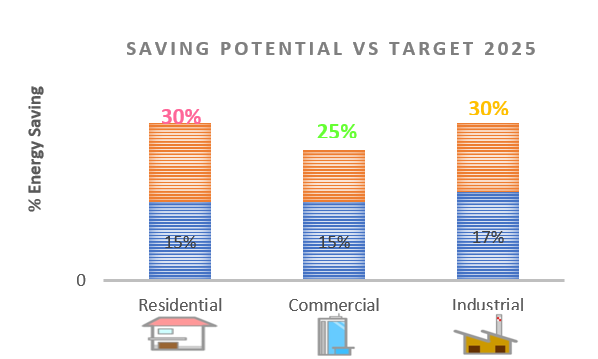 Power Generation efficiency tends to fluctuate and slightly decreased during recent years. Overall average efficiency of power plant stood approximately at 30%. The efficiency trend is even lower because the reduction of the share of hydroelectricity and the development of coal power plant. The limited development of more efficient technologies, such as gas combined cycles and cogeneration, did not permit an increase in the ratio for thermal power generation

The rate of Transmission and Distribution (T&D) losses of the Indonesian grid in 2016 is 10% of the whole distributed volumes, that is slightly higher than the world average (8.16%). Those losses tend to fluctuate significantly and have decreased slightly since 2005. 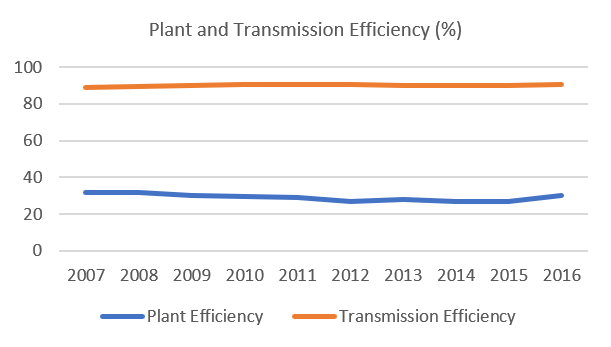 As mentioned by the Directorate of Energy Conservation in 2015 during national green chillers workshop, the estimation of investment that is needed to achieve energy saving targets in Indonesia is USD 6.02 billion. Indonesia has also developed various EE&C financing mechanisms schemes including an Infrastructure Fund and Viability Gap Fund. Actions for energy efficiency improvement is divided into different sector, as shown in Table 2 below: 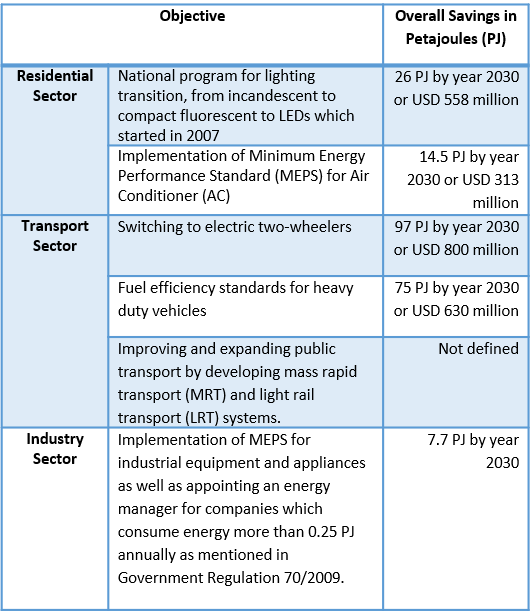 Under Government Regulation. No. 70 / 2009 (Article 17, 20 and 22), three different actions for supporting energy efficiency in Indonesia has been defined such as giving facilities, incentives and disincentives. The detail is shown as Table 3 below: 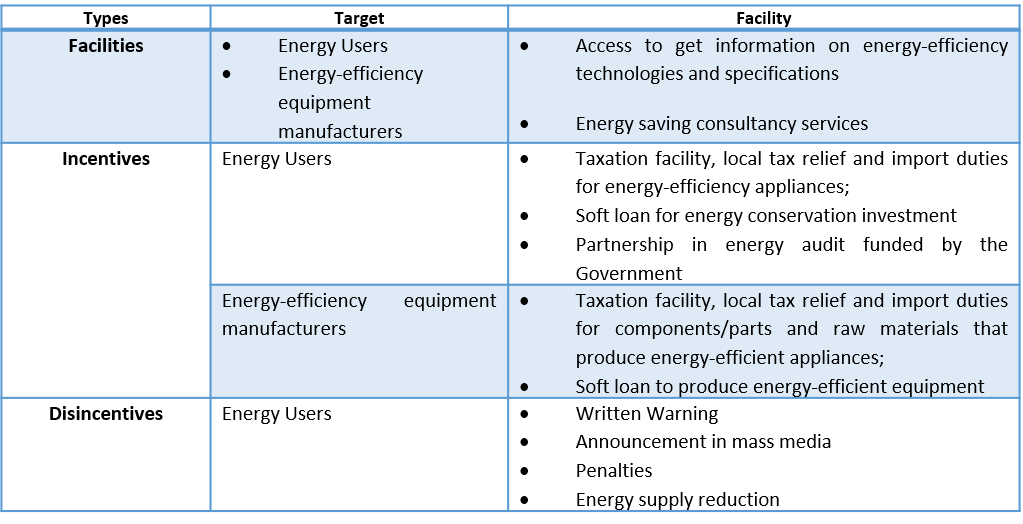