The Philippines has clear renewable energy targets, with a detailed roadmap indicated in the National Renewable Energy Program (NREP 2017-2040) as shown in Figure 4. Based on the plan, the RE installed capacity in 2040 will be at least 20,000 MW. In order to achieve this goal, separated specific targets for three regions are set: Luzon, Visayas, and Mindanao. Luzon will be the major area for RE utilization, where around 66% of total RE capacity are planned to be installed.

Hydropower, geothermal, and wind power are the three main sources of RE power generation in 2040. The Philippines is the only ASEAN country with a rigid plan for ocean energy development. According to the plan, the first operational ocean energy projects, which include Ocean Thermal Energy Conversion (OTEC), wave and tidal, should be developed between 2015 and 2020.

RE Targets of Philippines 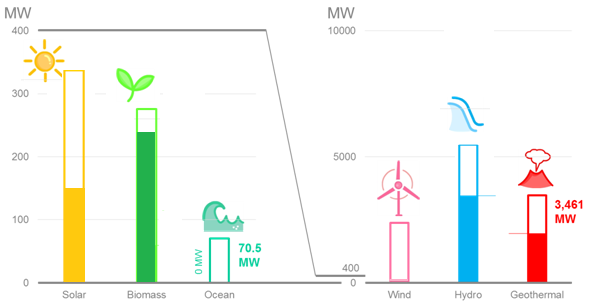 Note: Please note the different scales of the two graphs.

The total RE power generation in the Philippines is around 23 TWh in 2017 as shown in Figure 6. Similar to the RE generation mix, the share of hydropower and geothermal dominate the RE generation. Both contribute to 86%. Currently, The Philippines is the second largest geothermal power producer in the world (after the USA). Over the recent years, RE power generation from (i.e. solar, wind, biomass, biogas, etc.) resource has grown rapidly. In 2014, the share was nearly negligible or around 2%, while in 2017 the share is approximately 14.27%.

Source: The Philippine’s Department of Energy

The government of the Philippines has introduced several mechanisms to encourage investment into renewable energy sector such as income tax exemption up to seven years, duty-free import of equipment for renewable energy technology, etc.

In the Philippines, the state owns all RE resources. Hence the RE developers must enter into contract with the Philippine government in order to utilise those resources. According to the DOE, the awarded renewable energy service contracts could accumulate to 3,247 MW of installed capacity. The main contributor is still hydropower with 1,281 MW. This capacity does not include another 118 hydropower projects, which are currently being negotiated. If contracts are awarded, additional 2,866 MW are expected.

The FIT scheme in Philippines is applicable to four types of renewable energy sources: solar, wind, biomass, and hydropower (Figure 7). The FIT for solar in the Philippines are considerable high compared to worldwide and EU rate. 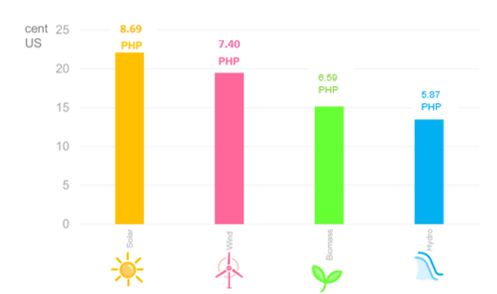 The government financial institutions namely the Development Bank of the Philippines (DBP), Land Bank of the Philippines (LBP), Phil-Exim Bank, and other financial institutions will provide preferential financial packages for the development, utilisation, and commercialisation of renewable energy projects as duly recommended and endorsed by Department of Energy according to the extent allowed by enabling provisions of their respective charters or applicable laws.