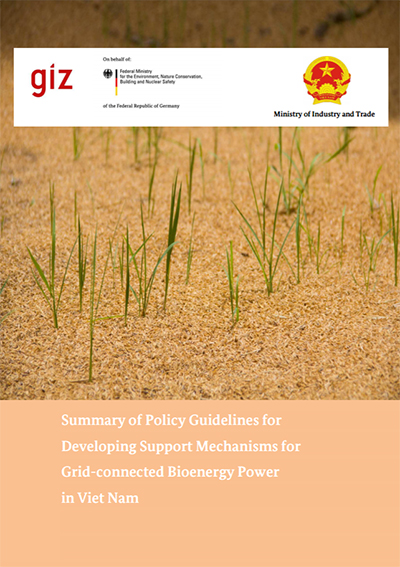 Vietnam’s high economic growth rate has led to increasing demand for electricity. Between 2001 and 2010, electricity production (including imported electricity) increased at average annual growth rate of 13.8%, nearly double the rate of overall economic growth. Electricity demand is expected to keep growing significantly in the forthcoming period, 2011–2030 forecasted at 10% per year, driven by increasing urbanization, population growth, as well as economic growth and industrialization. This development raises the questions regarding the availability of energy resources and environmental issues.

Realizing the problems, the Vietnamese government has decided to increase its reliance on renewable energy sources for electricity generation. The power development plan for period 2011-2020 with outlook to 2030 (in short, called as Power Development Plan 7 or PDP7 ) sets the target for renewable at 4.5% total electricity generation output by 2020 and 6% by 2030 from about 3.5% in 2010 – which are substantially higher than those set in previous power development plan. Additionally, under Vietnam National Climate Change Strategy, approved in December 2011 and the Vietnam Green Growth Strategy, approved in September 2012, renewable energy development is also seen as important measure to mitigate climate change and to drive sustainable economic growth.

Bioenergy (biomass, biogas and solid waste to energy) is also an important and diverse energy source and one that the country is endowed in, the Vietnam government has the plan to develop separate support mechanism to promote the development of power projects based on these sources, similar to that of wind energy. In this regard, the GIZ and General Directorate of Energy (GDE) under the Ministry of Industry and Trade (MoIT) have organized the implementation of the studies on support mechanisms for grid-connected projects as basis for the development of support mechanism. They were conducted in the framework of the GIZGDE/MOIT Renewable Energy Support Project which is a subsequent project to the above described wind energy project and were carried out by consultants from the Institute of Energy and an international consultant from Germany.

This publication is developed based primarily on these three reports. However, in some cases, original documents which were cited in those reports are examined so as to highlight important aspects.