Guidelines for Implementing SSEG Support Mechanisms for the ASEAN 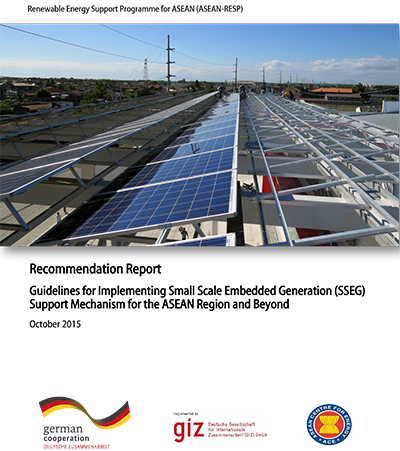 Renewable energy (RE) has an important role to play in delivering a sustainable energy future. It enhances energy security, decreases dependence on imported fuels and contributes to the mitigation of climate change by reducing CO2 emissions. In the ASEAN region, there are significant potentials for the use of RE. Over the past years, many ASEAN member states (AMS) have stepped up their effort in developing national RE programs, setting RE targets, putting into place regulatory frameworks and policies to support the deployment of RE systems.

One approach which is currently discussed in several AMS is net-metering for small scale embedded generation (SSEG). While net-metering can be an effective means to deploy small-scale generation and to foster private investments into RE by the electricity customers, technical as well as regulatory considerations have to be taken into account. Clear technical guidance for the interconnection of decentralized RE generation systems, especially photovoltaics (PV) has to be in place as well as a favourable pricing/tariff structure to incentivise investments.

The recommendation report on “Guidelines for Implementing SSEG Support Mechanisms for the ASEAN region and beyond” is developed jointly by ASEAN-RESP and international experts as an output of the “Technical and Regulatory Aspects of Net-metering” workshop. The purpose of this guideline is to provide a basic framework and introduce important aspects that must be considered in the implementation of SSEG supporting mechanism. Experiences and good practices from the region and international are provided as parts of the guideline.

This guideline is to be used by policymaker and regulatory bodies when SSEG supporting scheme is to be rolled out in their country. It can also be read by interested person to understand important aspects of SSEG supporting mechanism.