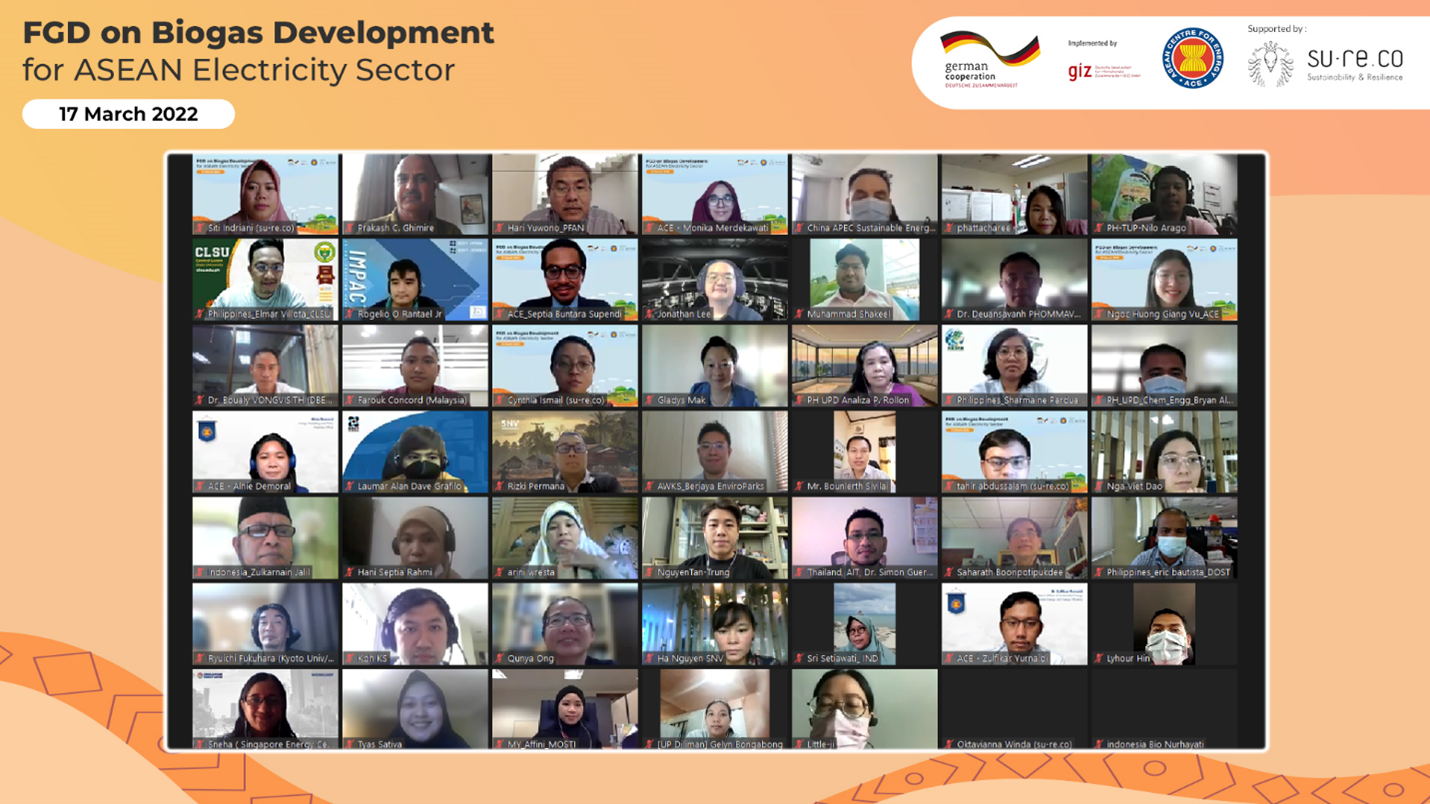 The FGD was conducted virtually and attracted more than 130 participants representing different key stakeholders in biogas, including government agencies, development banks, energy consumer groups, industry associations, project developers, advocacy groups, academe, and think tanks from 10 ASEAN Member States (AMS) and other nations outside the region such as Japan, China, Germany, and other European countries.This FGD is part of the activities from the study to validate the results from desktop research, surveys, and interviews on how the key stakeholders in AMS perceive and plan the biogas-to-electricity pathways. Three aspects have been brought up in the discussions, which are (1) to explore the existing barriers, risks, and opportunities of biogas-to-electricity in ASEAN, (2) to identify the appropriate technologies and feedstock for biogas in ASEAN power sector, and (3) to understand the policy gap to promote biogas development in the ASEAN electricity system.

Dr. Sussanne Rentzow, Regional Project Director of European Commission-funded EURAXESS ASEAN, presented the introduction to Euraxess. Euraxess is an initiative backed by the European Union (EU) and associated countries to support research mobility and career development and strengthen scientific collaboration between Europe and the world. In the second keynote speech, Professor Hideki Ohgaki, Group Leader for Environment and Energy Japan-ASEAN Science, Technology and Innovation Platform (JASTIP), presented “Current biogas-to-electricity status, pilot case, and funding opportunity.” He highlighted that to overcome the current obstacles of biogas development, such as high transportation costs and insufficient resources for domestic supply, all-out efforts and strong collaboration in all sectors of society, such as industry, consumers, and the government, are critical.

To give the audience an overview of AGEP, Ms. Melati Wulandari, Advisor from AGEP, shared an introduction to AGEP Phase II. The ACE-GIZ cooperation timeline and the AGEP of objectives with past and current activities have been highlighted. In the next session, Ms. Monika Merdekawati, Technical Officer from ACE, introduced the organisation and study development. The study serves Programme Area No.5 – Renewable Energy, with the Outcome-based Strategy No.5 – Support biofuel and bioenergy development, according to APAEC Phase II (2016 – 2025).

The main agenda was a series of discussion sessions moderated by su-re.co. The first one focused on identifying the barriers and opportunities for biogas development in ASEAN countries, while the second one aimed at feasible technology and feedstock for biogas-to-electricity. During the discussion session, questions were given using the online platform to address the barriers and opportunities of biogas in the ASEAN power sector from non-regulatory and regulatory aspects. These participants were then divided into three breakout rooms to share their opinions on the mentioned topics. Different perspectives from key stakeholders were received, providing insightful information regarding the current status, as well as technological, economic, political and regulatory, social and environmental issues in biogas development.

Finally, in the closing remarks, Mr. Septia Buntara Supendi, Manager of REE Department at ACE, expressed his gratitude to all the speakers from the EU, Japan, and participants from AMS for their active participation throughout the workshop. Mr. Septia highlighted the importance of global collaboration to achieve the regional RE targets and emphasised that the opinions and ideas exchanged during the FGDs were beneficial to the study itself and the bioenergy development in ASEAN. He hoped the study would provide a reference point to the governments and policymakers, and more discussions on bioenergy development would be conducted in the future. (GV/MW)