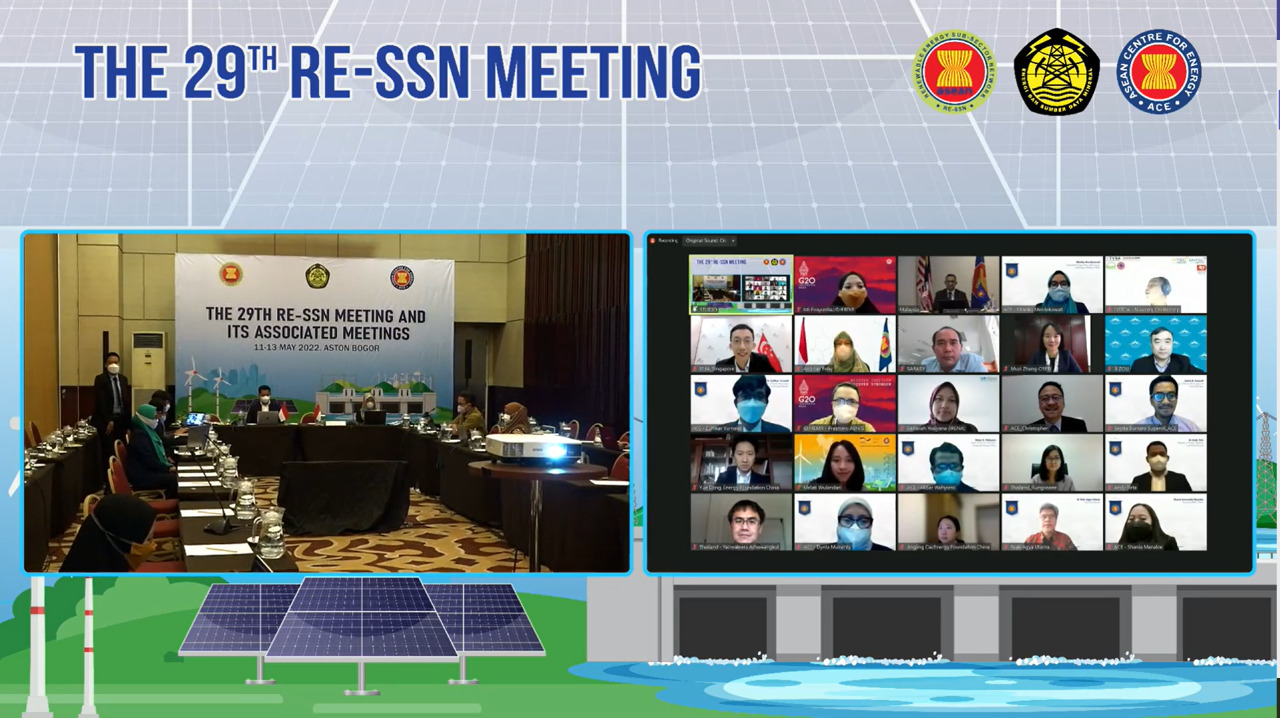 The 29th Renewable Energy Sub-Sector Network (RE-SSN) Annual Meeting and the Associated Meetings were organised virtually on 11 – 13 May 2022 by the Ministry of Energy and Mineral Resources (MEMR) of Indonesia and the ASEAN Centre for Energy (ACE). On the first day, the Workshop on Energy Storage Development in ASEAN was organised to exchange energy storage information and policies on a global and regional scale, best practices of energy storage deployment, and business models. In addition, the workshop provided insightful recommendations regarding energy storage in ASEAN, such as emphasizing the benefits of battery storage systems (BESS), providing incentives for ancillary services with further RE penetration, and utilising existing hydropower facilities to develop pumped hydro energy storage systems.

The second day began with the Focus Group Discussion (FGD) of the ASEAN RE Long-term Roadmap, with participants from AMS working group, RE-SSN Focal Points, and guest speakers from International Renewable Energy Agency (IRENA) and United Nations Economic and Social Commission for Asia and the Pacific (UNESCAP). The FGD discussed the national RE roadmaps, the existing RE policies, and valuable case practices from dialogue partners/international organisations (DPs/IOs) in developing roadmaps internationally. The recommendation of using the key findings of the 7th ASEAN Energy Outlook (AEO7) – one of the flagship publications of ACE supported by AGEP, in the development of the roadmap was also adopted. The agenda was then continued with ASEAN-IRENA Consultation Workshop discussing the IRENA-ACE’s ongoing projects, the ASEAN Plan of Action for Energy Cooperation (APAEC) Phase II activities and its priorities for 2022 – 2023 with the RE-SSN Focal Points.

The 29th RE-SSN Annual Meeting was held on the last day, 13 May 2022. Mr Asdirhyme Abdul Rasib, Senior Undersecretary for Sustainable Energy, Ministry of Energy and Natural Resources (KeTSA) of Malaysia, and Ms Andriah Feby Misnah, Director of Various New and Renewable Energy of MEMR Indonesia, were respectively the chair and vice-chair. In the meeting, the RE-SSN Focal Points discussed the progress of the implementation of the RE Programme Area under the APAEC Phase II: 2021 – 2025, the outcomes of the associated meetings, the collaboration activities with DPs/IOs, and also provided insightful guidance to complete the ongoing milestones. In this meeting, the progress of new initiatives was presented. Two notable studies implemented by AGEP, “Biogas Development in ASEAN Electricity Sector” (Biogas Study) and “Impact Analysis and Review on Governance of RE Financing Scheme” (RE Financing), were mentioned. The reports of both studies are under the finalisation process and are expected to be published in September 2022.

In the afternoon session, the meeting had a dedicated session on a discussion between RE-SSN Focal Points, ASEAN Secretariat, and ACE with International Organisations (IOs) and Dialogue Partners (DPs). Representatives from DPs/IOs, namely GIZ, IRENA, China Renewable Energy Engineering Institute (CREEI), Minister of Economy, Trade and Industry (METI) Japan, Energy Foundation China (EFC), and National Science Technology and Development Agency (NSTDA) presented their progress of activities in RE. Sergey Makarov, the Principal Advisor of the ASEAN-German Energy Programme (AGEP), mentioned AGEP’s long-standing cooperation between ACE and GIZ, also achievement throughout this project period as it is coming to an end, including the 6th and 7th ASEAN Energy Outlook (AEO6 and AEO7), Biogas-to-Electricity and RE Financing Report. It is also announced that a new phase of this project will be commenced early next year.

In the closing remarks of the RE-SSN Meeting, Mr Asdirhyme and Ms Andriah expressed their gratitude to Indonesia as the host country and to ACE as the secretariat for excellent arrangements. They also recognised the warm hospitality of the RE-SSN Focal Points and DP/IOs throughout the meetings. They hoped their contribution could profoundly support the acceleration of RE deployment in the region, achieving the aspirational RE targets under APAEC Phase II. (VNHG, MM, MW)