RE Guideline on Biomass/Biogas Power Project Development in Indonesia 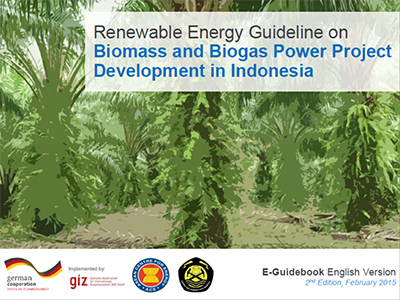 The guideline details the procedures for developing a biomass/biogas power plant in Indonesia. It is a comprehensive, easy-to-access and regularly updated online tool which includes complete information on ideal RE project development cycles in the respective countries.

The guideline highlights administrative procedures, including requirements for project developers and/or investors, lists legal and regulatory provisions and necessary permits, identifies country-specific challenges for project development, as well as provides information on how to obtain financial closure.

The RE guideline was published by the Directorate General for New, Renewable Energy, and Energy Conservation (EBTKE; Direktorat Jenderal Energi Baru Terbarukan dan Konservasi Energi) in cooperation with the Gesellschaft für Internationale Zusammenarbeit (GIZ) GmbH in the framework of Energy Programme Indonesia/ASEAN.

In Indonesia, the latest national energy policy was announced in October 2014 (Government Regulation – PP no. 79/2014). The share of new and RE in the national energy mix is to be increased by at least 23% in 2025 and by at least 31% in 2050, from 8% in 2013. To achieve these targets, private and foreign investment is expected to play a prominent role in the RE sector.

As an archipelago country that extends out horizontally with the equa-tor running through it, Indonesia is a nation well-suited for growing a wide variety of plants, fruits, and vegetables due to its tropical climate. With such a strong agricultural sector, Indonesia therefore has signifi-cant potential to utilize agricultural waste as feedstock for power generation. Oil palm, rice paddies, and sugar cane have been identified as the top three crops in terms of production volume. The technical potential of using biomass from these three crops for electricity production is estimated at around 43,211 GWh per year. With the current power demand of 187,541 GWh, realization of the biomass power po-tential can considerably change the national power mix.

The Indonesian feed-in tariff for biomass and biogas (known as “guarantee price”) was first issued in 2012 through Ministerial Regulation – PERMEN (ESDM) no. 4/2012. It was applicable for up to 10 MW biomass/biogas power plants (including municipal solid waste).

The new Ministerial Regulation – PERMEN (ESDM) no. 27/2014 was issued specifically to incentivize biomass/biogas power plant project development. It introduced higher base tariffs and uplift factors than the ones stipulated in 2012 (PERMEN (ESDM) no. 4/2012). The base tariffs are now defined separately for biomass power plants (PLTBm; Pembangkit Listrik Tenaga Biomassa) and biogas power plants (PLTBg; Pembangkit Listrik Tenaga Biogas). In general, the tariff for a biomass power plant is higher. The regulation also outlines a more transparent procedure for project development.

In recent years, ASEAN member states (AMS) have made considerable effort to tap into the vast wealth of renewable energy (RE) resources in the region. Several countries introduced feed-in-tariffs (FIT) or regulations for RE as well as other supportive policies, e.g. tax and customs exemptions or tax holidays.

Despite those efforts and some promising developments, a large-scale market for RE applications has not yet been set in place in the region. In particular, complex administrative procedures, a lack of transparency in the project cycle and permitting procedures as well as insufficient access to financial resources can be identified as important obstacles to an effective market and industry development.

The ASEAN RE Guidelines were developed to facilitate an increase in private sector activity and investment in the RE sector of the ASEAN region. Since the confidence of project developers and investors is needed in order to boost region-wide RE deployment, the provision of transparent project development and permit procedures is a necessity.

With comprehensive, easy-to-access and regularly updated online tool which includes complete information on ideal RE project development cycles in the respective countries, the ASEAN RE Guidelines were designed to meet the needs of project developers and potential investors, as well as promote transparency and clarity in the RE projects’ pathway.